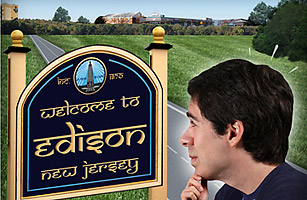 A few days ago I received an email from one of my colleagues at my work. He was deeply insulted by an article written by humorist Joel Stein in the July edition of Time Magazine. At first look I was agreeing with the “insult” that my colleague felt. By the way this colleague and I share the same first name..That is a story for another day…

Of course being reactive the way I am, I forwarded my colleague’s email to initiate an “official protest” to a few of my close friends who share my Indian heritage. By the way Mr. Stein’s article has spread like wildfire on the Web ..

After a few responses from my close friends I realized that I had grossly mis-interpreted the Joel Stein’s humor laced article in Time Magazine. Yet a part of me still wanted to send an email missile towards Mr. Stein.

What Mr. Stein writes about is valid. The Indian community has indeed taken over Oak Tree Road in every aspect. The 2 to 3 miles of strip malls that have been taken over by the Indian shopkeepers can indeed be intimidating to individuals of individuals that call themselves to be “true red, white and blue Americans”.  I have mixed emotions about the Edison, NJ version of “Little India“.

On one hand when I go to Oak Tree Road in Edison, NJ feel like I’m back in Mumbai or in New Delhi. Better yet where I grew up, in Jackson Heights, New York. Most of my formative years from high school was spent in similar environment on 74th street! Except for the parking problems,  “Little India” is a slice of my childhood. I feel at home, because of  my young adult life being raised amongst the stores and hustle and bustle of working in Jackson Heights!

On the other hand, I dread going to Edison, NJ and partaking and contributing to the economy of Woodbridge, NJ. The racism that prevails with the Woodbridge Police against the Indian Community in this town is notorious. I’ve been gifted with a ticket or two during my visit to Oak Tree Road for parking violations as well! You are guaranteed a “dirty look” welcome by the non south-asian residents whose homes line the road that is called Oak Tree Road.

Even being a naturalized “Desi”,  I am intimidated by the choice and the community that is known globally as “Little India”.  I can imagine the thoughts of someone that grew up in this community and coming back after 10 years what his/her perspective might be!

Additionally, some of the storekeepers and their employees barely speak the English Language and act like they are back in their respective cities, towns, and villages that they originated from.

Everywhere you look, all you will find tastes (literally and figuratively) of  Mumbai, New Delhi, and all parts of  the India diaspora right here! From Carom Boards,  Indian clothes, jewelry, food, restaurants, dry cleaning, there is nothing is nothing you can’t find here that you are looking.  I can find print copies of local news papers from India here with within 24 hours of publication in any language that you call your native tongue from India!.  Anything you want that’s India based can be found with multiple varieties and choice within a 3 mile strip of road.

All the deities that Mr. Stein mentions in his article can be found in abundance at any of the multiple grocery stores on Oak Tree Road. If you go to MetroPark Train station in Edison,  any Non-South Asian  is a minority at the train station between 6:00 AM and 9:00 AM. As a matter of fact, Metropark is the defacto premier  stop of the “desi express”  North-East Corridor of New Jersey Transit that stop in Metropark, Metuchen, Edison, New Brunswick and all the way to Princeton

At Metro Park, you see an abundance of advertising by the Bollywood mega icon Amitabh Bachhan and all the stores that line Oak Tree Road.

When my family first immigrated from NY to NJ in the early 1980’s to Edison, NJ, Oak tree road was just in it’s infancy.  There was an abundance of the stores and establishments like “Pizza Hut” that Mr. Stein mentions. Unfortunately, all I remember is the Bars and shuttered stores that littered Oak Tree Road and it’s various strip malls that have now been made alive and vibrant by the Indian merchants.  I remember I used to go the Famous Pizza  on Oak Tree road for “special occasions” and having only a handful of stores, where I could get my desi groceries.

So when I read Mr Stein’s article, I was at first astonished at the outright racism expressed in his words. Yes both Time and Mr. Stein did apologize for his words. After absorbing the context of his article, I do not think Mr. Stein needs to apologize for his humor.  I have to  admit every word he says in his article does hold true. The assimilation of the Indo-American culture  is so visible in Woodbridge, NJ and Little India, that  it is very difficult to determine where the Indian culture ends and the American culture begins.

As a matter of fact, many of the kids that have gone to J.P Stevens High School in Edison have been my older daughter’s best friends.  My daughter has spent many years of her young life amongst the citizens of Woodbridge, NJ that she is most at home in that community. Both my daughters have performed at the annual Independence day festivities in Oak Tree Road as well as ride on the floats that go down the main avenue of Oak Tree Road.

So I do applaud Mr. Stein for his article and I know that many will find his words offensive (similar to my colleague from work who asked for an “official protest” of this article).

You know what, I am going to do to appease the masses that will protest Mr. Steins humor in his article? I’m going to officially protest my own blog posting as an Indian Born Confused Desi’s  (IBCD) response being an member of the Indian community that is known as Little India!