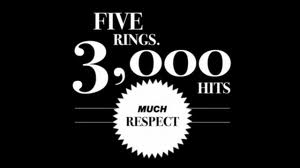 As everyone knows I’m not a Yankee Fan, but an accomplishment like 3000 hits from a classy guy like Derek Jeter is worth writing about. Now I really don’t care about all the fanfare that surrounded this accomplishment that was in the media for weeks before the actual event which occured today.

In this day of when you have athletes that ruin their reputations with Steroids, drugs and other questionable behavior, the continued class that Jeter shows as a Yankee is truly admirable.  A few days ago, I was listening to the “talking heads” on sports radio and they were discussing whether Jeter deserves to be in the Hall of Fame with his stats.. What a stupid conversation that was. Anyone who play Jeter, is a captain, a role model, and performs day in and day out in my mind, is a shoo in for the Hall of Fame!

Congratulations Derek, you are one of 28 players that are now in the 3000 hit club. For a Met fan to say this, it’s truly a tribute to your efforts as the Yankee captain. I may not watch many games (only when I go their with my resident Yankee fan in my house!), but hearing of your accomplishment was wonderful to hear!

Not only does Jeter have have 3000 hits, he have 5 World Series Rings! That’s more than I can say for anyone on the Mets today or tomorrow! I wonder how many of the other elite member of the 3000 hit club have this? Now he can start on his next goal of 3500 or even 4000 as he still has about 2 1/2 years left on his contract.

As I sit here and watch my Metsies, I think is Reyes ever going to match this goal?  Probably not, with his inclination to have leg problems. Also, he will probably get this goal but not as a Met!

You know what I just realized? I’m becoming more of a “closet” Yankee follower at the same time continuing to be a long suffering Mets Fan…